Fresh blood products are products that can be manufactured by simple separation of blood into its components via centrifugation. Prior to issuing product, there are a number of steps undertaken by the Australian Red Cross Blood Service (the Blood Service) to improve the safety of the products supplied. These include:

Red blood cells transport oxygen. Red cell transfusions are used for people with cancer and other blood diseases, people having surgery, people with anaemia, people during childbirth, and trauma patients. More information can be found under the 'What's in a bag of red cells?' webpage. 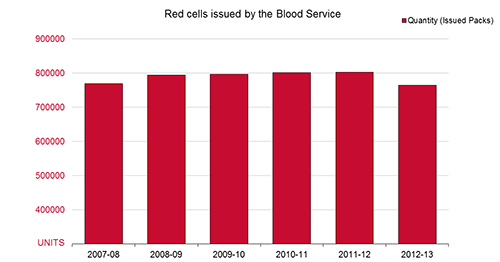 Platelets are important for blood clotting and tissue repair. A low platelet count is called thrombocytopenia.

Platelet transfusions are required when patients have a low platelet count, or have problems with their platelet function. These patients include people with cancer who are receiving chemotherapy, people who have a bone marrow transplant, people who take medicines that interfere with platelet function and patients who are bleeding. More information can be found under the 'What's in a bag of platelets?' webpage. 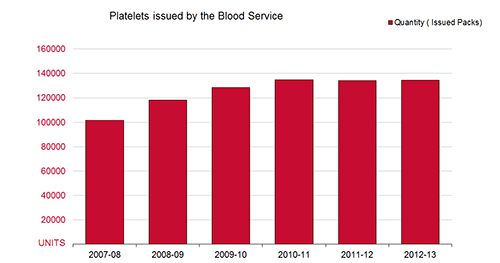 Plasma is the liquid component of blood, and is mostly made of water. Plasma carries blood cells and other substances around our body.

The Blood Service manufactures three plasma products as described below.

Plasma is the liquid component of blood. Fresh frozen plasma is used to replace clotting factors and also by patients who need to quickly reverse the effects of blood thinning medications. More information can be found under the 'What's in a bag of plasma?' webpage.

Cryoprecipitate is made from fresh frozen plasma. It contains proteins, including fibrinogen, involved in blood clotting. Cryoprecipitate is used in patient where they have a reduced level of fibrinogen, or where their fibrinogen is not working property. This may include during a trauma, or massive bleeding. More information can be found under the 'What's in a bag of cryoprecipitate?' webpage.

Cryodepleted plasma is made from fresh frozen plasma. It used most commonly in plasma exchange for patients with thrombotic thrombocytopenic purpura (TTP). More information can be found under the 'What's in a bag of cryodepleted plasma?' webpage.

The Blood Service also provides plasma to CSL Ltd for the manufacture of plasma derived products.